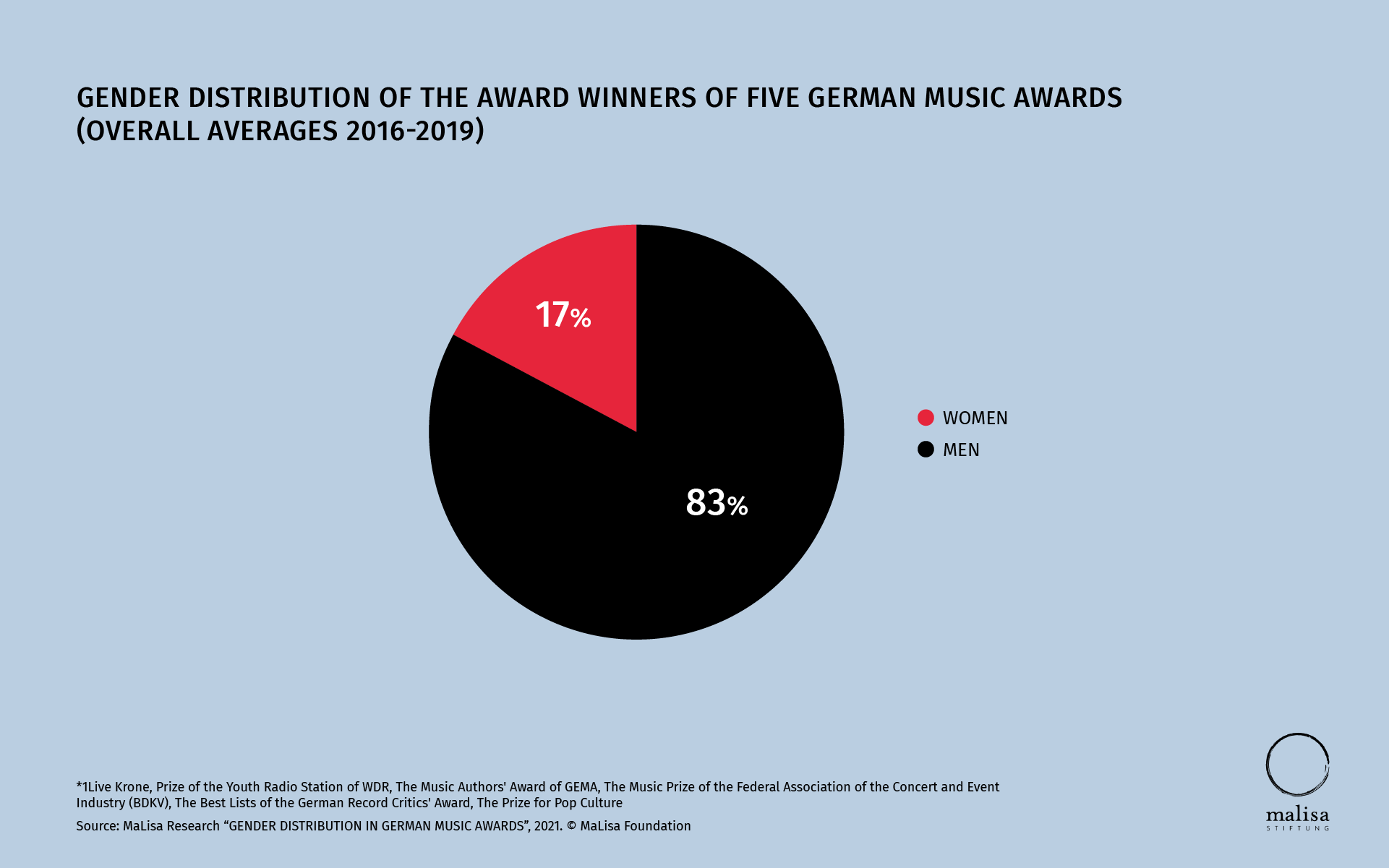 To help improve the data available on gender distribution in the music business in Germany, the MaLisa Foundation analysed a sample of five German music awards. Both the processes for awarding prizes and the winners were examined. The result is sobering and shows the need for action regarding gender equality.


For the research, five German music awards were analysed according to the gender distribution of the prize winners based on the names of the musicians. Women and non-binary persons are clearly underrepresented in the five German pop music awards evaluated. This applies to the winners of all five pop music awards as well as to the special evaluations of the nominees, authors and jury members.

These music awards were examined from 2016-2019. Due to the pandemic, several prizes were not awarded in 2020. For better comparability, all five prizes were therefore considered for the same period:

For three of the five prizes (1 Live Krone, Music Authors’ Prize, Prize for Pop Culture), gender ratios among the nominees and the prize winners were also analysed. For the prizes that publicise the composition of the jury (Music Authors’ Award, Music Prize of the BDKV, German Record Critics’ Award), the gender distribution of the jury was also evaluated.

Female musicians are awarded prizes significantly less often than their male counterparts: The winners for the period 2016–2019 show a clear male predominance of 83 percent.

Over the course of 2016-2019, no lasting change is apparent: Throughout all of the music prizes, the ratio of female to male prize winners remains at around 1:5 during this period. The analysis of all composers, lyricists and authors involved in the production of singles and albums (according to the GEMA directory) shows a similar ratio between men and women. Men are also clearly in the majority in the juries that determine the prize-winners. Music awards put selected artists in the spotlight and help them gain more popularity and career opportunities. They thus send an important signal for the industry as a whole, for up-and-coming artists, and also for consumers.

The clearly unbalanced gender distribution among nominees, award winners and jury members contributes to a consolidation and reinforcement of already existing disadvantages for women in the music business.

To counteract this, analyses of the causes for the exclusion of women*, as well as effective measures for a more balanced gender ratio on the different levels of music awarding are necessary. A first step would be to establish transparency concerning the gender distribution of the jury, nominees and award winners in the call for nominations and awarding all music prizes.