GENDER EQUALITY IN THE MUSIC INDUSTRY

The structural discrimination of women and non-binary people in the music industry is now a much-discussed topic, not the least thanks to numerous initiatives that address the issue. But what has changed on this front in recent years? How present is the non-male perspective in the industry? And what is the situation in terms of participation? In cooperation with GEMA and Music S Women*, the MaLisa Foundation has conducted research on gender equality in various areas of the music industry. The results show hardly any improvements for the period since 2010.

In 2021, the MaLisa Foundation cooperated with the international initiative, Keychange, for a Study on Gender Diversity in the Music Industry and Music Usage. The results show that women and men assess gender equality and the equality of opportunities in the sector very differently.

The new MaLisa research "Gender in Music - Charts, Works and Festival Stages" now provides further data which supports these initial assessments. The research was conducted in cooperation with GEMA and Music S Women* and focuses on gender equality in the charts, in GEMA work registrations, and on festival stages.

The goal was to include the protagonists as well as the creative people offstage, those who compose and produce. What is the gender ratio among songwriters? Who actually receives money from collecting societies like GEMA? What is the gender distribution in the charts, and in the many songs that did not make the charts? And has the situation changed since 2010? If so, to what extent? Have initiatives such as Keychange, for example, which campaign for a 50/50 quota at festivals, already had an effect?

For the analysis, gender distribution was evaluated among the authors of song titles in the Top 100 singles charts in three sample years within the period from 2010 to 2019. To ensure comparability with the live music industry, the study looked at 2019 as the last year with regular live concerts. In addition, works registered with GEMA were evaluated according to the same criteria, in cooperation with GEMA. In addition, gender distribution on 15 different festival stages (small, medium-sized and large festivals) was analyzed. The analysis of live stages covers the same period of time and, in cooperation with Music S Women*, also includes the year 2022.

The results reveal a clear imbalance in terms of gender equality in the music industry, both in the charts, in work participation of registered songs, and on festival stages.

The music industry remains highly male-dominated: More than 85% of the music in the German weekly charts is composed by men. There was a small increase of 1% in the proportion of women members of GEMA. In contrast, the share in registered songs declined slightly.

On the festival stages, a slight increase in the proportion of women is evident within the period studied. Nevertheless, the participation of female musicians on the evaluated festival stages remains significantly below 20%, with an average of 16% in 2019. Exceptions are found mainly at smaller or medium-sized festivals, which reach up to 29% participation of women. Music S Women* also observed an upward trend on the festival stages in the line-ups for 2022. Especially the smaller festivals show a clear improvement in the proportion of female musicians. However, the numbers are still far from a just distribution.

The music industry has remained highly male-dominated over the past decade, with almost no perceptible change. Women are significantly underrepresented relative to their numbers in society, and non-binary people and other gender identities are even less visible and were virtually impossible to identify.

Regardless whether in songwriting, the charts, GEMA membership, the songs registered there or the festival stages: the proportion of women remains well below one-fifth in all areas. And no clear upward trend can be detected within the period studied. In fact, there was even a regression in certain areas. Only festivals show a tentative upward trend in the proportion of women. 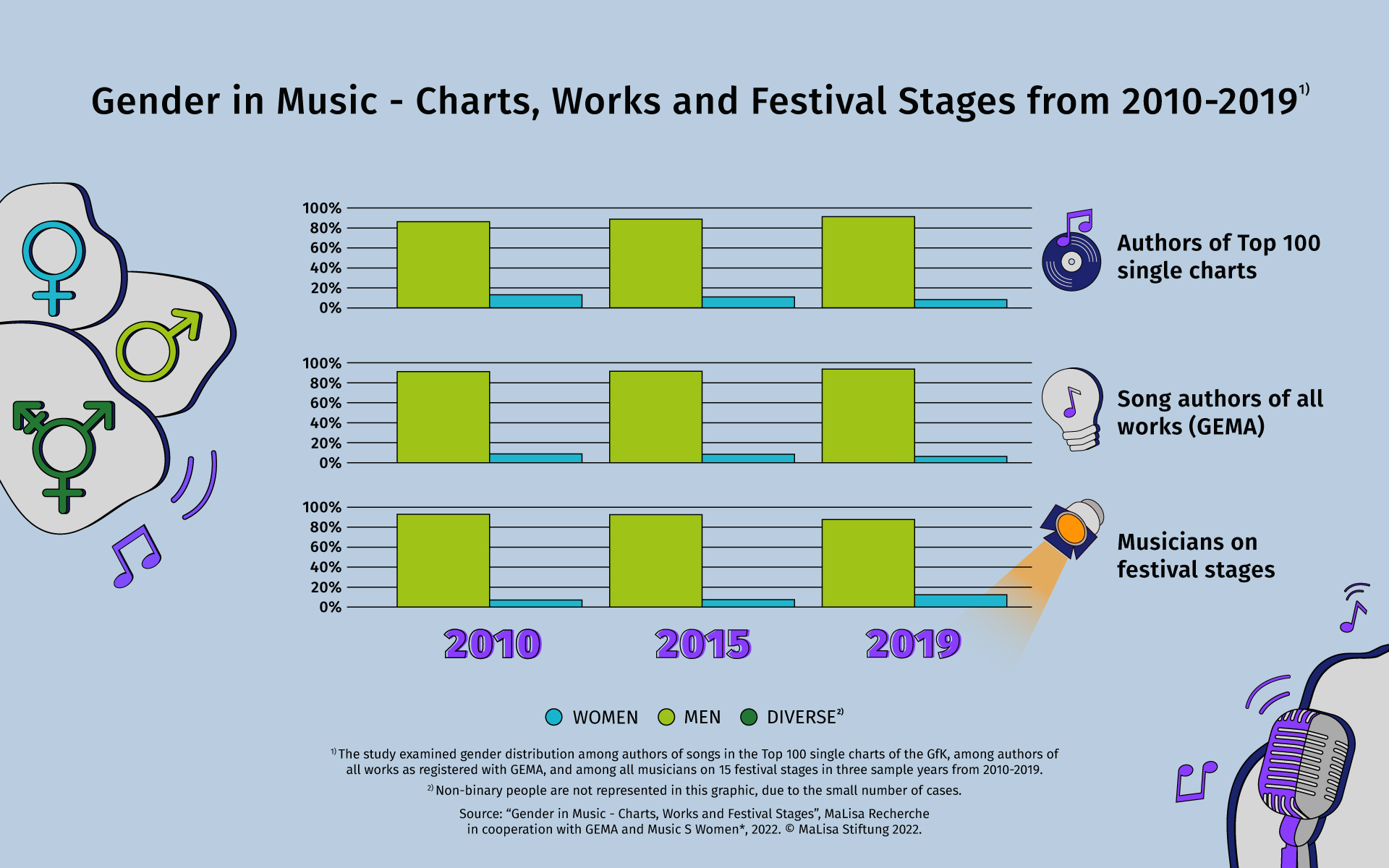 More than 85% of the music in the German charts is composed by men. In the period studied, there was even an upward trend in the proportion of men. 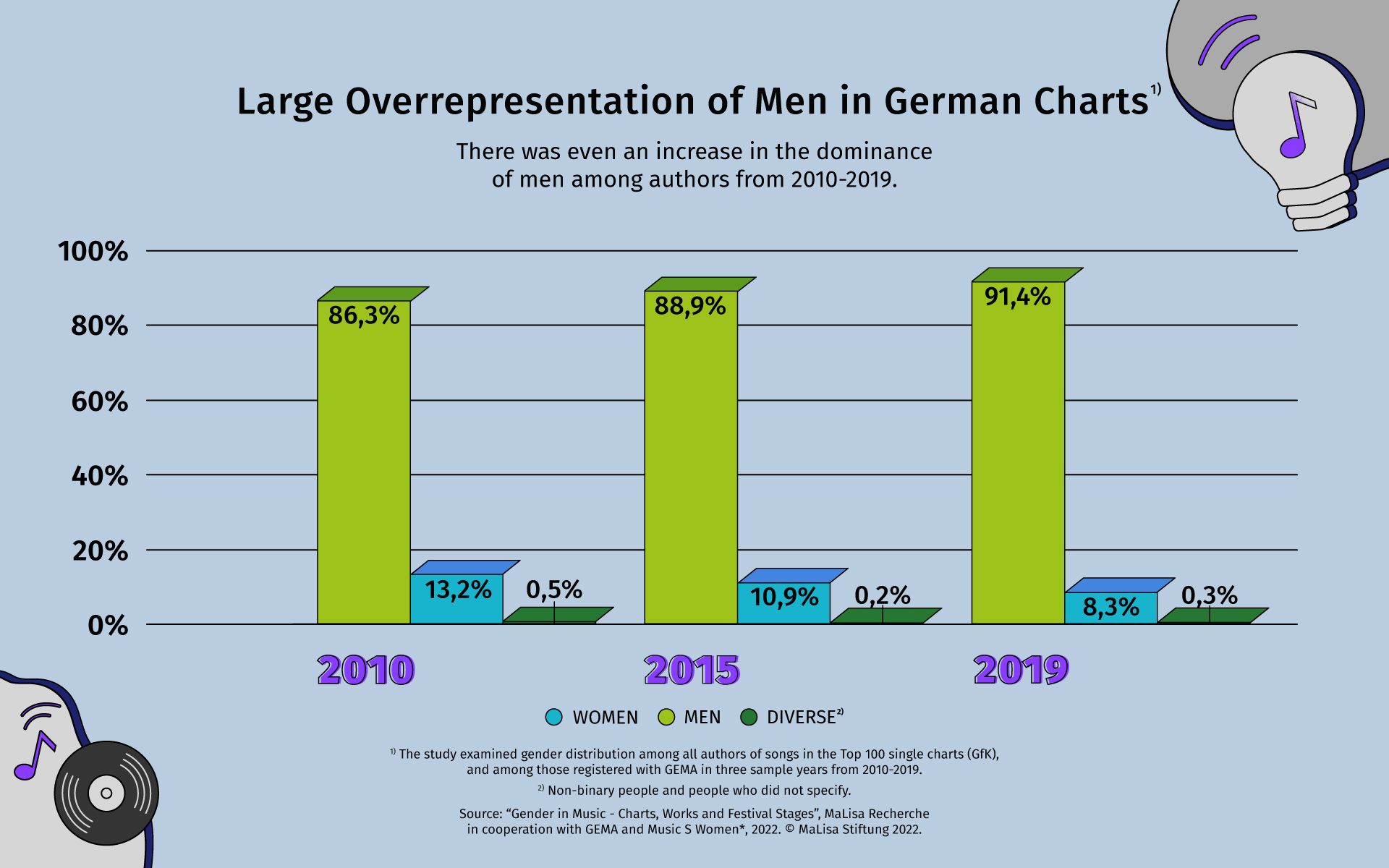 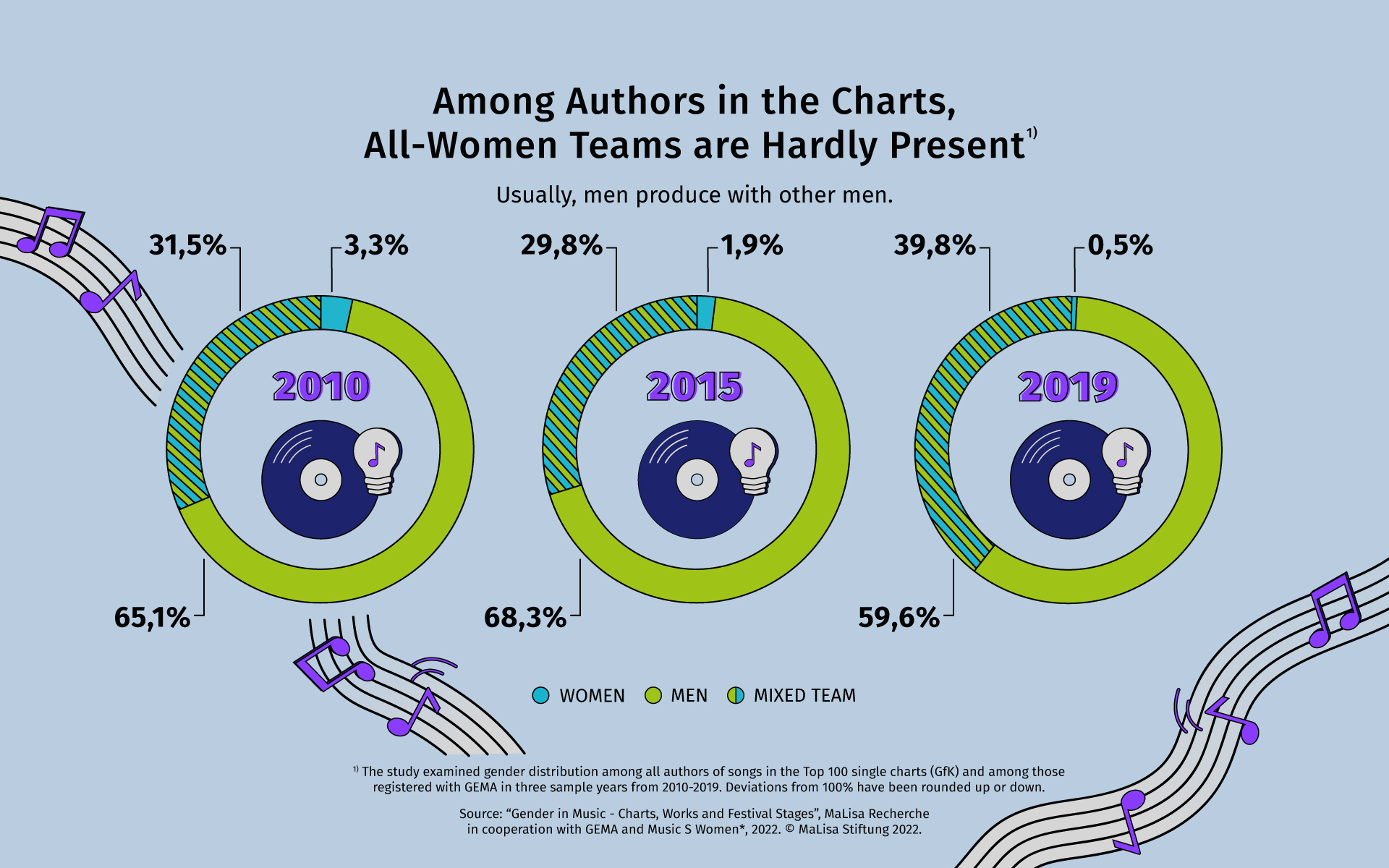 Among the "long-running hits," i.e. songs that remain in the weekly singles charts for more than half a year, the proportion of women is comparatively much higher: In 2010, there were around 21% women authors of song titles. In 2015, there were just under 12%, and in 2019, 12%.

A look at the songs registered with GEMA reveals an even greater imbalance: While the number of songs registered each year has increased significantly since 2010, the proportion of women involved has fallen from less than 9% in 2010 to 6% in 2019. 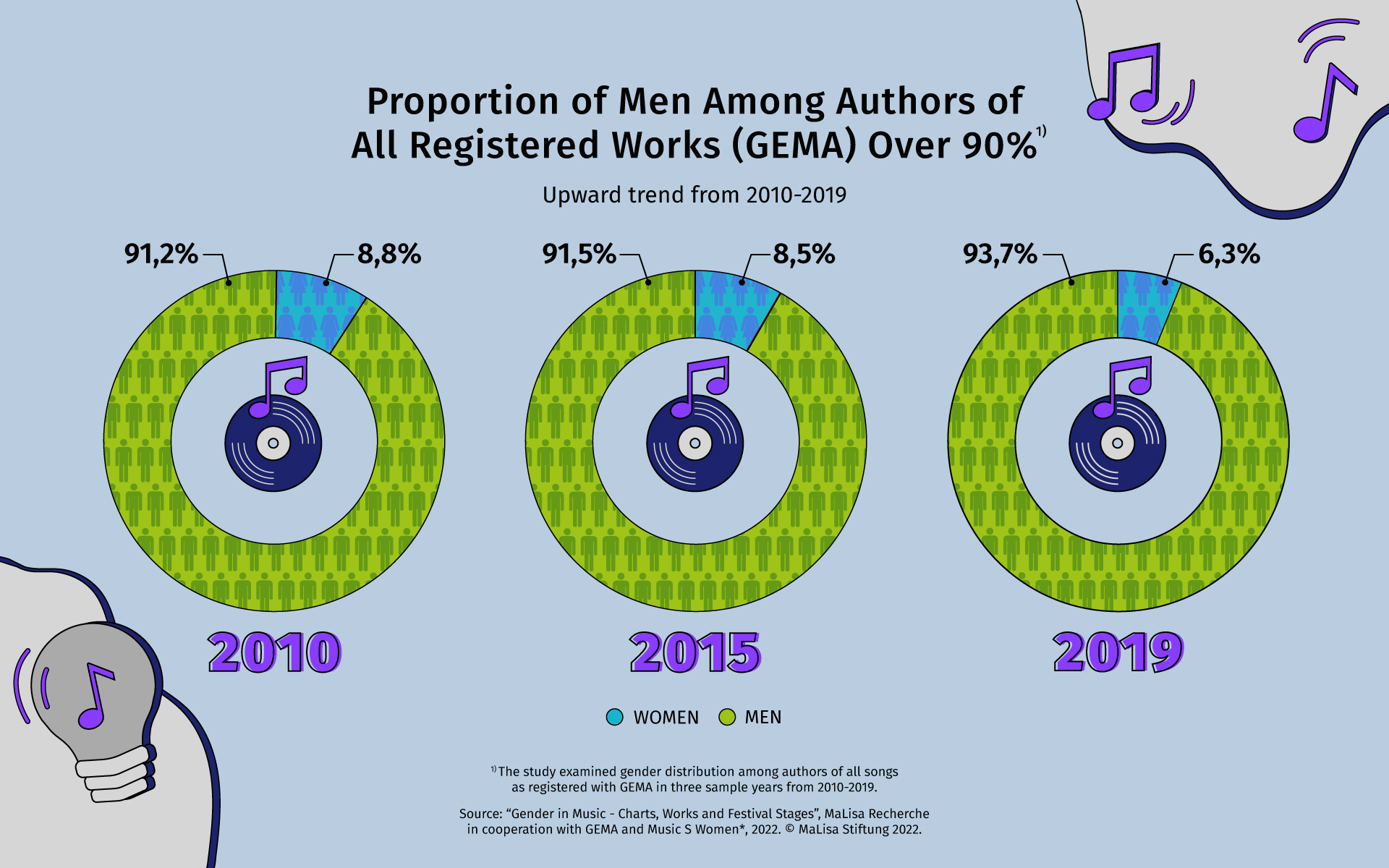 On the festival stages, the participation of female musicians remains below 10% on average in the period studied. However, an overall increase in the proportion of women can be observed over time, from around 7% in 2010 to just over 12% in 2019.

The additional evaluation of the year 2022 showed a positive upward trend, with a female proportion of 16%. 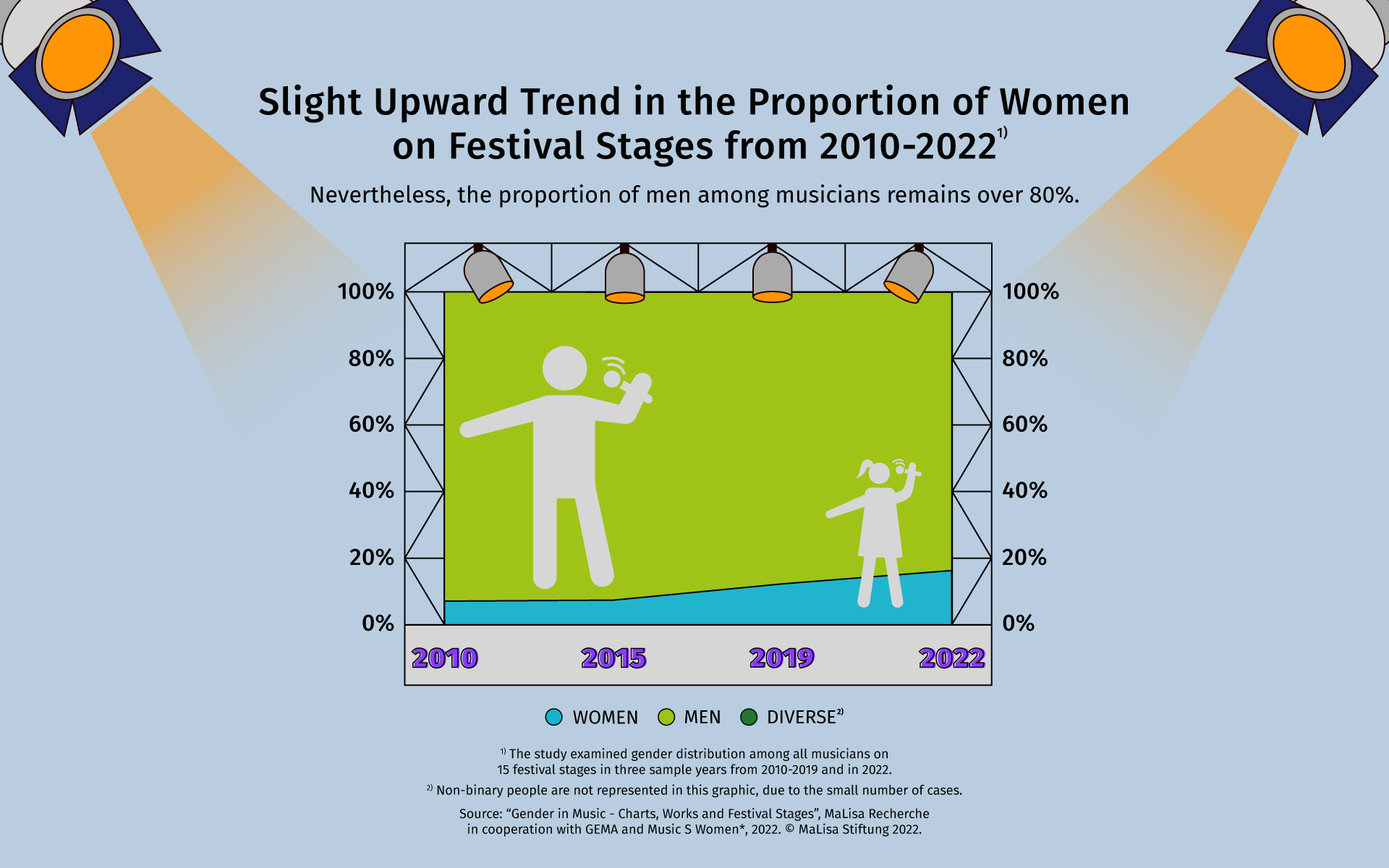 The increase in the proportion of women was greatest at smaller festivals: It doubled from 8% in 2010 to just under 17% in 2019.

The larger the festival, the more entrenched the male predominance, with a few exceptions: At festivals with 41,000-200,000 visitors, the proportion of women grew from just over 6% to just over 8% over the course of the years. 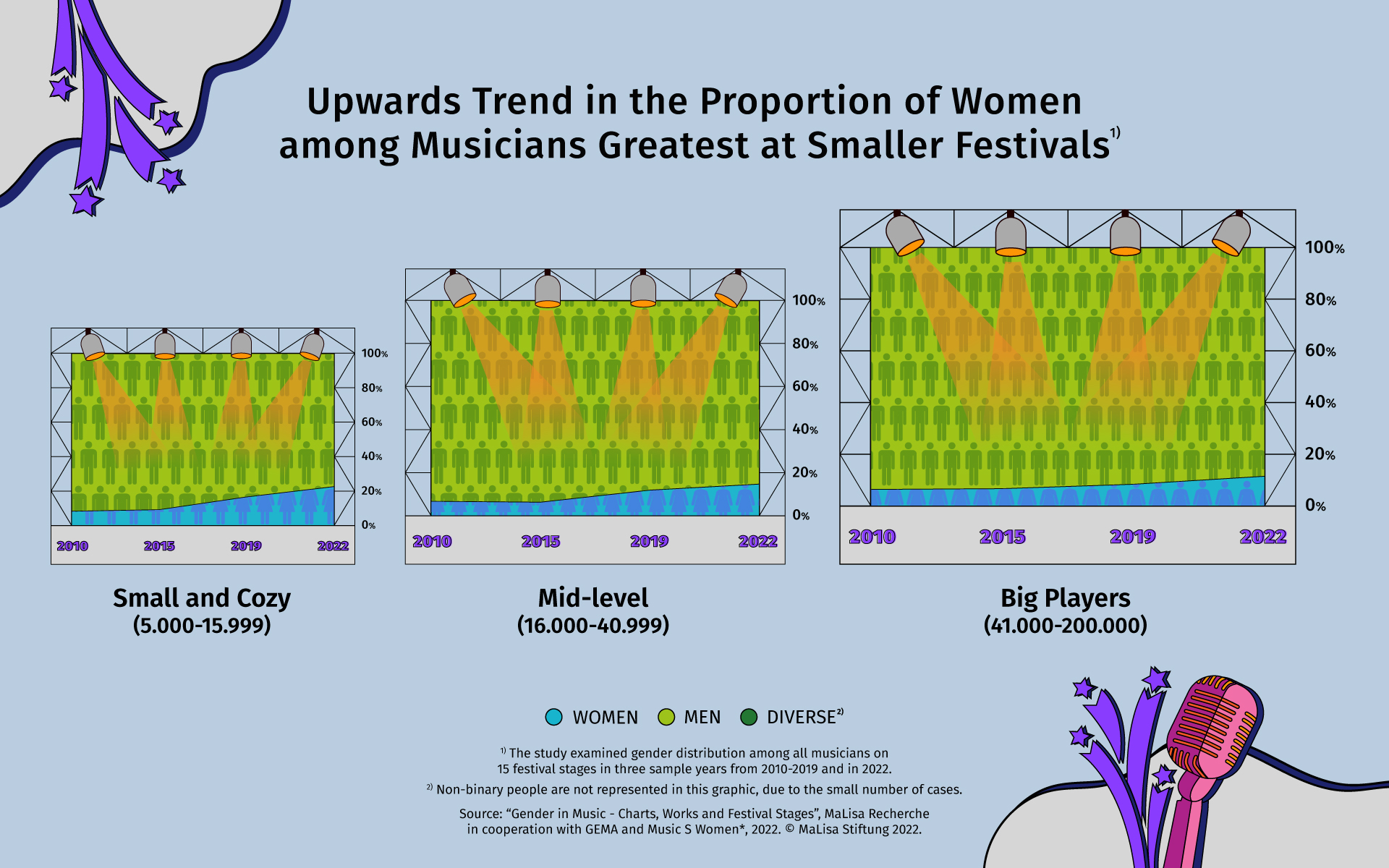 The festival with the highest percentage of women on stage in 2022 was Melt Festival with 38% - a festival that signed Keychange's 50:50 Pledge.

GENDER IN MUSIC – AND NOW?

The data is sobering: Women and non-binary people continue to be severely underrepresented in the areas of the music industry surveyed. But there are also positive developments - and there are ways to accelerate these improvements.

Knowing where inequity exists is a prerequisite for effecting change. Periodic data collection is therefore essential as a basis for better understanding the “baseline” situation. Systematic gender monitoring can help companies in the sector to identify areas where action is needed, to introduce measures and, in the course of time, to measure the impact of those measures in the company and in the sector.

Research and experience from other countries and other industries show that there are effective measures to correct an existing imbalance. These include concrete targets/quotas for a more balanced gender ratio, for example in music awarding, on festival stages and generally in collaboration with artists, crews, teams, booking agencies and many others.

Keychange's work is effecting change: Over 500 festivals and music organizations worldwide have already signed the 50:50 Pledge for gender-balanced lineups. The network is growing. As the current evaluation of festivals has shown, the Pledge is already proving effective for more equitable participation on stage.

Decisions made by major players in the industry have the potential to accelerate positive change. Real structural change requires willingness to commit to a longer-term process, while individual measures can already provide important and effective impetus. Spotify's "EQUAL Global" music program, for example, aims to help reduce inequality in the music industry by empowering female musicians.

Creating and supporting an empowering environment for women and non-binary people in all sectors of the industry is crucial. Funding programs can help counteract structural deficiencies with gender-responsive and diversity-oriented eligibility guidelines. Networks such as Keychange and Music Women* Germany offer their members not only the opportunity for dialogue and mutual support, but also training, mentoring, and conferences and presentation opportunities.

Consumers also help determine whose music is successful. Music fans can, for example, raise their own awareness of more diverse voices and productions, compile and distribute gender-equitable playlists, listen to radio stations that are committed to a quota. They can make a conscious decision to attend festivals, concerts, and events that are committed to gender equity. They can deepen their knowledge of why women and non-binary people face barriers in the industry, and share that knowledge with others. And they can educate themselves about and take action against structural inequalities and discrimination.

Last but not least, the music industry itself must create structures that are equally fair and inviting for professionals of all genders. Each and every person in the industry can advocate for more equitable structures and policies with heightened awareness and a clear stance. Finally, men can use their networks to promote and mentor women and non-binary people or educate colleagues about injustices. In this way, everyone can play an important role on the path to greater gender justice.

For the study, gender distribution was evaluated in various sectors of the music industry in Germany over ten years for the years 2010, 2015 and 20191:

The analysis was conducted by Katya Rupp on behalf of the MaLisa Foundation, inspired by analyses by the Zündfunk editors Ann-Kathrin Mittelstrass and Katja Engelhardt. The journalists had analysed the Top 100 annual charts several times and most recently over the period 2010-2020, together with GEMA.

In order to expand this analysis and to intensify the results, the MaLisa Foundation has evaluated the authors of all 52 weekly single charts of GfK of the years 2010, 2015, 2019.

The data analysis was conducted by the MaLisa Foundation, in cooperation with GEMA.

GEMA classified the respective members according to composers and lyricists.

The research was conducted by Susann Hommel, on behalf of the MaLisa Foundation and in cooperation with Music S Women* e.V..

1 Due to the exceptional situation caused by the pandemic, especially in the live music sector, the years 2020 and 2021 were not included in the analysis.

3 The evaluation was based on Internet research and photo analysis. Since the artists could not be interviewed personally, it is possible that the assigned gender does not always correspond to the self-selected gender. Likewise, it cannot be ruled out that the researched line up does not match the actual line up, as there may be spontaneous changes to the program due to last-minute cancellations or changes in weather conditions that can no longer be traced on the Internet. 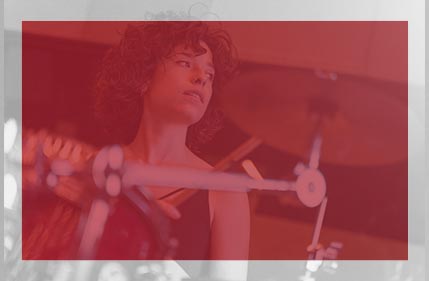 GENDER EQUALITY IN THE MUSIC INDUSTRY