“Even streaming series do not reflect society” 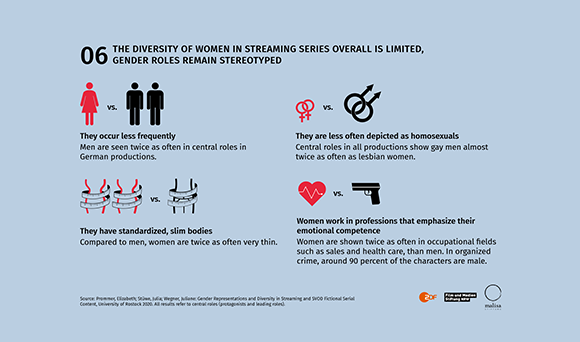 What are the representations offered by streaming series with regard to gender, sexual orientation and ethnic diversity? A study sponsored by the Film- und Medienstiftung NRW, ZDF and the MaLisa Foundation provides the first analysis of streaming and SVOD series in the German market.

The study “Gender Representations and Diversity in Streaming and SVOD Fictional Serial Content” was conducted under the direction of Prof. Dr. Elizabeth Prommer at the Institute for Media Research at the University of Rostock. The analysis covers nearly 200 series from providers such as Netflix, Amazon Prime, Sky and TNT Germany, which were released on the platforms between January 2012 and July 2019. These include both German productions and productions from other countries.

“With our participation in this study we want to contribute to transparency in the Streaming market, for which no data were available to date,” says Dr. Florian Kumb, Head of ZDF’s Program Planning Department, explaining the broadcaster’s reasons for supporting the study.

For Petra Müller, CEO of the Film- und Medienstiftung NRW, the study also fills an important gap: “The discourse on gender representation and diversity in the media has triggered tangible changes. Linear television, film, YouTube, streaming series – the studies of the University of Rostock create awareness, they provide data and facts that decision makers and creatives in the industry have to consider and act upon. This is why the Film- und Medienstiftung NRW has been a committed partner and sponsor from the very beginning”.

The key findings of the study show:

Compared to men, women are also underrepresented in streaming series, their diversity is limited, gender stereotypes remain entrenched: women occur less frequently in central roles, are young and have standardized slim bodies. They appear in professions that emphasize their emotional competence. The number of women in central roles is lowest in German productions (35 percent). Overall, there is a clear age gap: central roles from the age of 35 are almost twice as often filled by men as by women. From the age of 50, the male to female ratio is 3:1.

The examined streaming series show overall diverse sexual orientations. Among the central figures in which a sexual orientation is recognizable, 9 percent are LGBQ (lesbian, gay, bisexual, queer). However, gay men are depicted almost twice as often as lesbian women.

Non-binary and persons with other gender identities are hardly ever featured. In productions in all countries, they are seen in central roles in only nine out of 1,911 cases (0.5%). They are not at all represented in German productions.

With regard to perceived ethnicity, the streaming series are diverse from an overall perspective. In national contexts, however, the visibility of the majority population prevails. Overall, around 63 percent of the central roles are White. In German productions, this applies to 89 percent. None of the central roles can be read as black or Asian, 11 percent can be attributed to the Middle East.

For Maria Furtwängler, co-founder of the MaLisa Foundation, the findings illustrate “how important it is to compare perceived truths with facts. And they show: In some regards, international streaming series may be more diverse than the classic, linear television ones. However, this is not the case with regard to the portrayal of women. What a pity that the audience is still deprived of female role models in all their diversity”.

The fact that streaming and SVOD offers are not as diverse as one might generally assume is confirmed by the head of the study, Prof. Dr. Elizabeth Prommer: “Streaming series also do not reflect society: women are represented in a less diverse way than men. They appear less frequently, are younger, slimmer and are only seen in certain professions. Non-binary and persons with other gender identities hardly appear at all. And as far as the visibility of ethnic diversity is concerned, the respective majority population dominates.”