“WOMEN ARE THE TRUE HEROINES IN THE CRISIS, WE ARE TOLD BY MEN” 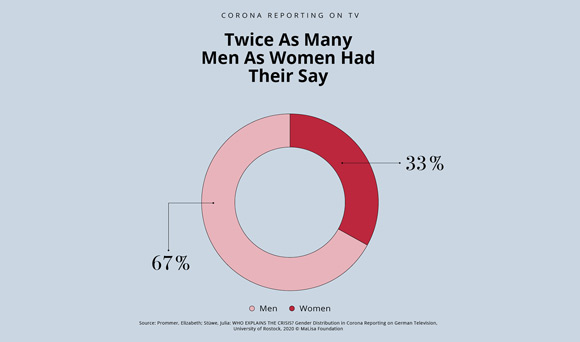 There has been much debate about the fact that in the political and media discourses on the corona pandemic in Germany, it is primarily men’s opinions that are in demand. Two recent studies by the MaLisa Foundation have examined gender justice in television reporting and in the online editions of print media. The focus was on the questions: How often do women and men have their say overall? How often and on which topics are they consulted as experts?

In order to get to the bottom of this, the MaLisa Foundation commissioned two studies: Prof. Dr. Elizabeth Prommer and Julia Stüwe from the Institute for Media Research at the University of Rostock evaluated a total of 174 Corona-related television information programs, which were broadcast between April 16 and 30, 2020 from 6 pm on ARD-Das Erste, ZDF, RTL and Sat.1. Max Berggren, data researcher and author of the Gender Equality Tracker, analyzed a total of 79,807 corona-related articles in the online editions of 13 print media for the same period.

The core results of the research on television and online reporting show that:

MaLisa founder Maria Furtwängler comments: “Our study on TV and film from 2017 already showed a great imbalance, especially in the area of female experts. It is particularly regrettable that this continues in the current crisis, in which experts’ voices are of particular importance. Nearly half of all physicians in Germany are women – yet female physicians comprise only one fifth of those appearing on television. I find that particularly shocking”.

Communications researcher Elizabeth Prommer, who examined the corona reporting in TV information programs for the MaLisa Foundation, added: “One of the most important results of our study is that women are not consulted, even when there are women experts available. What we are told by the media is tha ‘women are the real heroines in the crisis’ – and it’s men who tell us so.”